Posted in Reviews | Comments Off on Well done sir!

Come on Donald! Get cracking! Read both books (very nice) and am now experiencing withdrawal symptoms. Really need that 3rd book, sir. To those who are still deciding if they should read the story. Go for it! Laughs, action, stories within stories, and some characters you can relate to. Well done, sir!

5 Star Review of The Awakening By Julian on Goodreads.

Posted in Reviews | Comments Off on 5 Star Review of The Awakening By Julian on Goodreads. 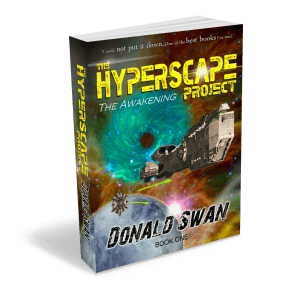 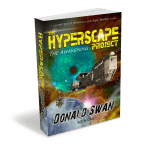 5 Star Review of The Hyperscape Project by Ragamuffin

Story line was fast paced with a great flow. The author manages to tell a story in such a way that one feels they are living In the moment of the story. Swan knows when to throw in the surprises and shockers. You won’t see it coming I hate it when reviews give away the plot so I will end it there. A must read. For those who usually don’t choose science fiction books, this will change your mind.

Posted in Reviews | Comments Off on 4 Star Review of The Hyperscape Project by James P. Ruff, Jr.

Ok, Mr. Donald Swan, I liked this enough to get the next one. I think this is a pretty good start to a series, if you don’t slow down the pace. Keep up the good work.

5 Star Review of The Hyperscape Project by Larry C. Holly

Posted in Reviews | Comments Off on 5 Star Review of The Hyperscape Project by Larry C. Holly

Excellent book, loved the characters and the concept of the story. I can’t wait for the next book. It’s a good read

5 Star Review of The Hyperscape Project by Bookslayer1958

★★★★★ Great read
Great character development .. Awesome read. If you like saga’s this is the beginning of a great one. Hope you enjoy !